This is my boy, Brett, at nine months. He was an awesome little dude—and he still is!  Awesome, that is, but not so little any more. At twenty-six, he is still wielding a hot bat and wearing red shoes. Not only does he play competitive softball, he writes about all sports at www.wcoastbias.com. 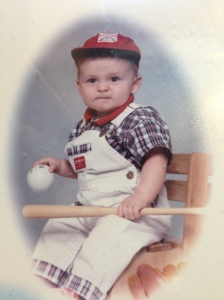 Perhaps his interest in sports began the day he came home from the hospital when his dad read him the sports page—the first of many readings. I believe the DNA from his dad implanted the sports bug in his brain, but his grandfather’s genes (and maybe his mother’s?) gave him the ability to write about them. Or, could it have been the 1995 Mariners making a run in the playoffs when he was seven years old that spawned his interest—our DNA may have had nothing to do with his talent.

Brett has never been shy. I say that as I recall him pulling down his pants to show our favorite grocery clerk his Power Rangers underwear in the middle of the aisle at QFC. As the years passed, he learned to temper his enthusiasm, but honestly, not that much. He keeps his pants on these days, but his fervor for the game of baseball cannot be denied.

As I ended my marriage five years ago, Brett’s love of the game probably saved my sanity. Our trips to Chicago, St. Louis, Milwaukee and San Francisco reminded me that life could go on—we had shared this journey with his dad in Los Angeles, San Diego, New York, Baltimore and Boston, but it was clear we could continue this trek on our own. We still have lots more to see and experiencing the game through his sharp sports mind has increased my enjoyment ten-fold. 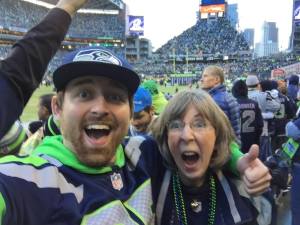 But, let’s not forget the Seahawks. The last couple of years have brought us immense joy through tailgating, Championship games and the Super Bowl!  Each year we seem to attend more games and were lucky enough to score tickets to the Green Bay game that sealed our spot in the Super Bowl. This picture tells the story of how we felt that day.

And we felt pretty darn good as we flew to Arizona to watch our Seahawks reach for a second Super Bowl ring. I won’t belabor the outcome—we all know what happened and we all just want to forget. That being said, we had an awesome weekend with friends sharing pre-game activities and tailgating on game day. I know I wouldn’t have gone to this game if it weren’t for my son and it was a weekend I will never forget.

Brett and I are a team when it comes to sports. There are still more baseball stadiums to enjoy and more Seahawks games to attend (after the tailgate, of course). I hope he never tires of my company as we travel down the road to sports history in Seattle.

But, there is so much more to my son. He is a kind man with a passion for doing the right thing. Did he learn that from me or was it Spider-Man who taught him of great responsibility? Brett cares about this planet and all the people and animals inhabiting his space. The child who once looked to me for answers is now a man who cares enough to reassure me that I, too, am a good, kind person with much to offer the world.

When I hear him tell someone how lucky he is to have me for his mom, I know that I am the lucky one. Love you, kiddo!